My House Is Now A Lab: Meet Mary Anne White 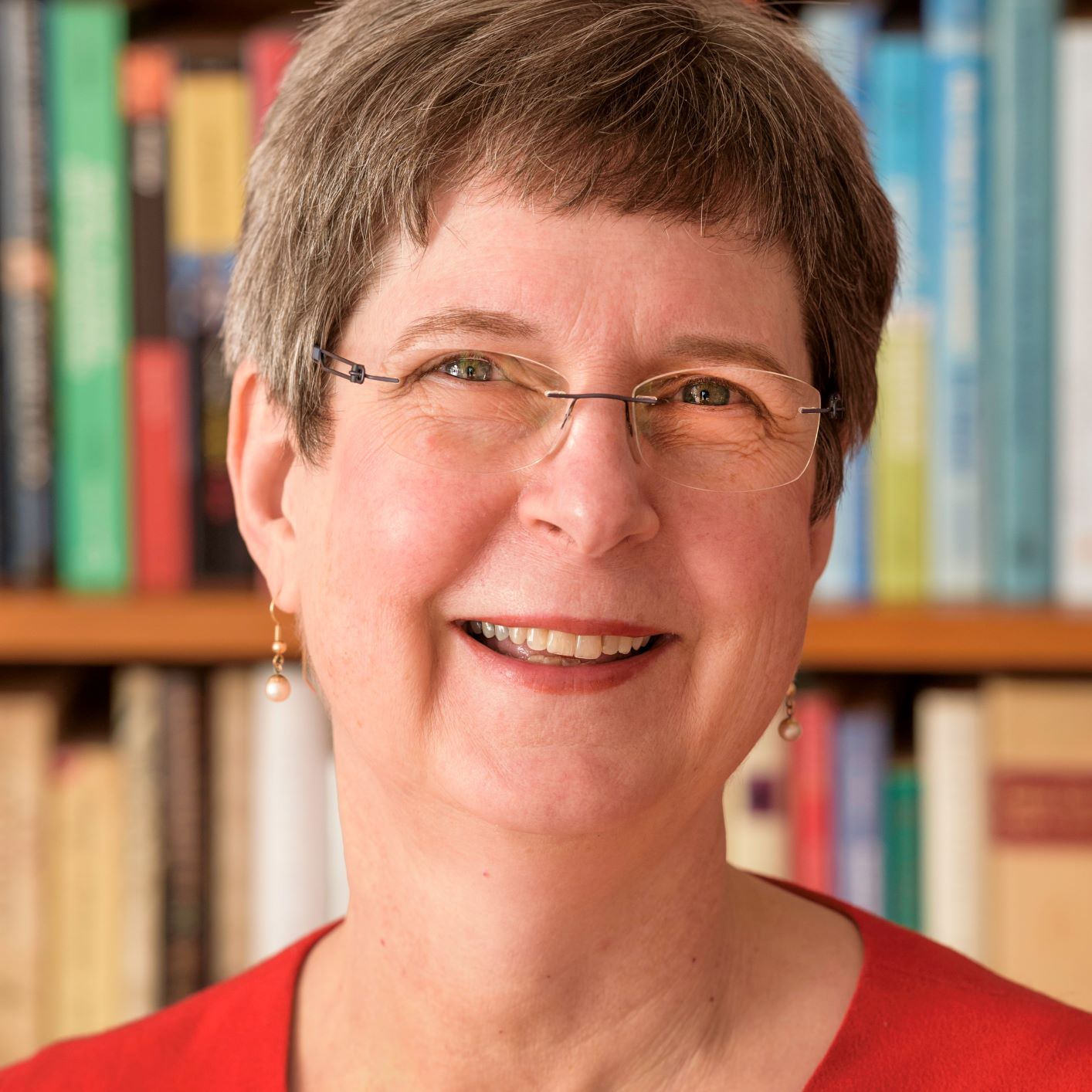 My House Is Now A Lab

When I was a child, my parents let me do experiments at home. For example, I left celery standing in coloured water on the counter for days at a time, so I could slice it open to observe the rise of the colour. When my children were young, I paid the favour forward by letting them explore the influence of baking soda on soapy vinegar, among other messy experiments. And now, some 38 years after establishing my own lab at a university, I also have a lab at home. In fact, my house is a lab, as I will now explain.

One of the most pressing problem of our times is the need for better energy sources. Intertwined with this is the need to reduce production of greenhouse gases, to mitigate climate change. A big hurdle to efficient use of renewable energy is storage, for times when the sun is not shining and the wind is not blowing.

An inescapable fact is that every time energy is converted from one form to another, there are inefficiencies. For example, converting solar energy to electricity and then electricity to heat, reduces the output to a fraction of the input. If we need heat, we should store heat. Heat and thermal properties of materials have been the focus of my research for four decades.

One of the great joys of being a professor is meeting people with new ideas, and helping them develop as researchers. Several years ago, a chemical engineer named Louis Desgrosseilliers approached me with an idea for graduate work that could make a significant difference in the world. Louis’ concept was to create a thermal battery. The principle is simple: use materials to take in heat energy when they melt, and give the heat back when they freeze. The trick was to get the material to freeze on demand, and Louis accomplished this in his PhD work.

With his goal to make a commercial thermal battery a reality, Louis then co-founded Neothermal Energy Storage. He and his partner, Jill Johnson, continue to work on the technical and commercial aspects, aiming to reduce the costs and environmental impact of heating. Late last year they asked me and my husband, Rob, if we would be willing to participate as a beta-test site for their unit. We readily agreed.

The thermal battery (shown below in our furnace room) contains about 230 kg of a salt that melts at about 58 oC, packed in several separate cells within the metal boxes. When the salt is heated, it melts and stores heat. This particular salt (sodium acetate trihydrate) does not easily crystallize, and the liquid salt can be cooled to room temperature, or even lower, without freezing. In this so-called super-cooled state, the thermal energy of melting is still stored, and the material acts as a thermal battery. The mechanical crystallization mechanism that Louis developed for his PhD work can be invoked to cause controlled crystallization, and concomitant heat release. 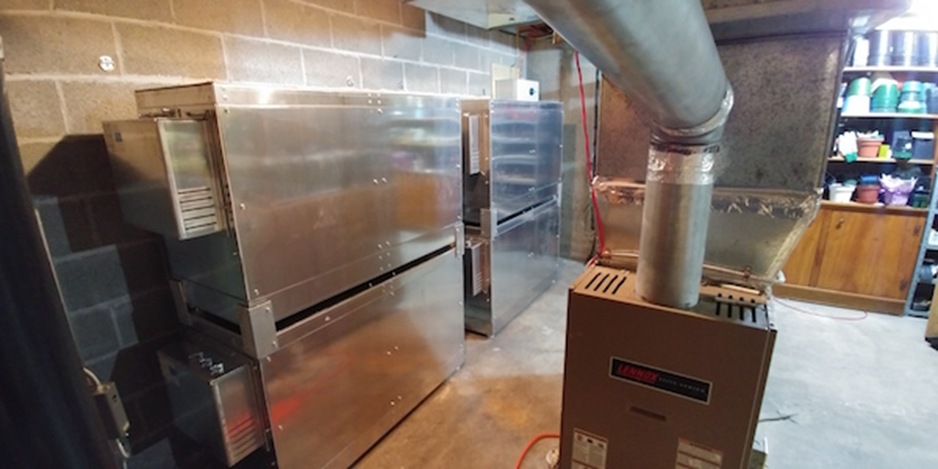 The thermal battery is located adjacent to our oil-fired furnace, and designed to supplant that heating source. It works as follows. At night, off-peak electrical power is used to melt the salt and superheat it to 100 ˚C to store 32 kWh of usable energy. The salt then remains in the liquid state until the thermostat calls for heat. When heat is required, a heat-exchange fluid flowing through the cells extracts heat from the salt and transports this heat to air that is distributed to the rest of the house by the furnace’s hot air blower. When the salts are cool and more heat is required, crystallization is triggered inside the cells, releasing more heat. The oil burner on the furnace is only used as an auxiliary heat source if the thermal battery cannot deliver heat quickly enough. Such situations could include going up to the usual set temperature from a very low set temperature when on vacation, or when the thermal battery is depleted at the end of the day during an exceptionally cold spell. The thermal battery recharges at night.

The advantages of the thermal battery system over the oil-fired furnace and water heater are two-fold.

First, there is the cost advantage. Per energy unit, off-peak electricity beats oil in cost, by about 30%. Furthermore, electric heat is much more efficient than an oil burner. The economic payback time for the commercial installation should be well within 15 years, the timeframe that consumers consider when making such improvements.

Even more importantly for the planet, the environmental impact of the thermal battery is significantly improved over fuel oil heating. Combustion of oil produces CO2 and other greenhouse gases. In Nova Scotia, which uses a blend of coal, wind, hydro, tidal, natural gas and biomass for electricity, emissions from electricity generation are 25% less than the equivalent energy from oil. Based on projected use of the thermal battery, greenhouse gas emissions from heating our house and hot water are predicted to drop by more than 20%. This value will continue to fall over time with increasing contributions of renewables and hydro to electricity production in our province.

In other provinces with lower emissions from electricity, such as Quebec, BC and Ontario, household emissions would drop more than 80% compared with oil. That drop, for our house, is equivalent to taking one combustion car off the road. Furthermore, thermal batteries can store solar thermal energy for later use, even more favourably replacing oil with solar energy.

The thermal battery installation is still a work in progress. It literally is an experiment, with our house as a lab. We are monitoring energy consumption, and Louis is fine-tuning the system to work optimally for both comfort and energy efficiency. But, over the first 30 days since installation, we are already reducing the use of the “auxiliary” source (the oil furnace) in favour of the “main output” (the thermal battery), as shown below. 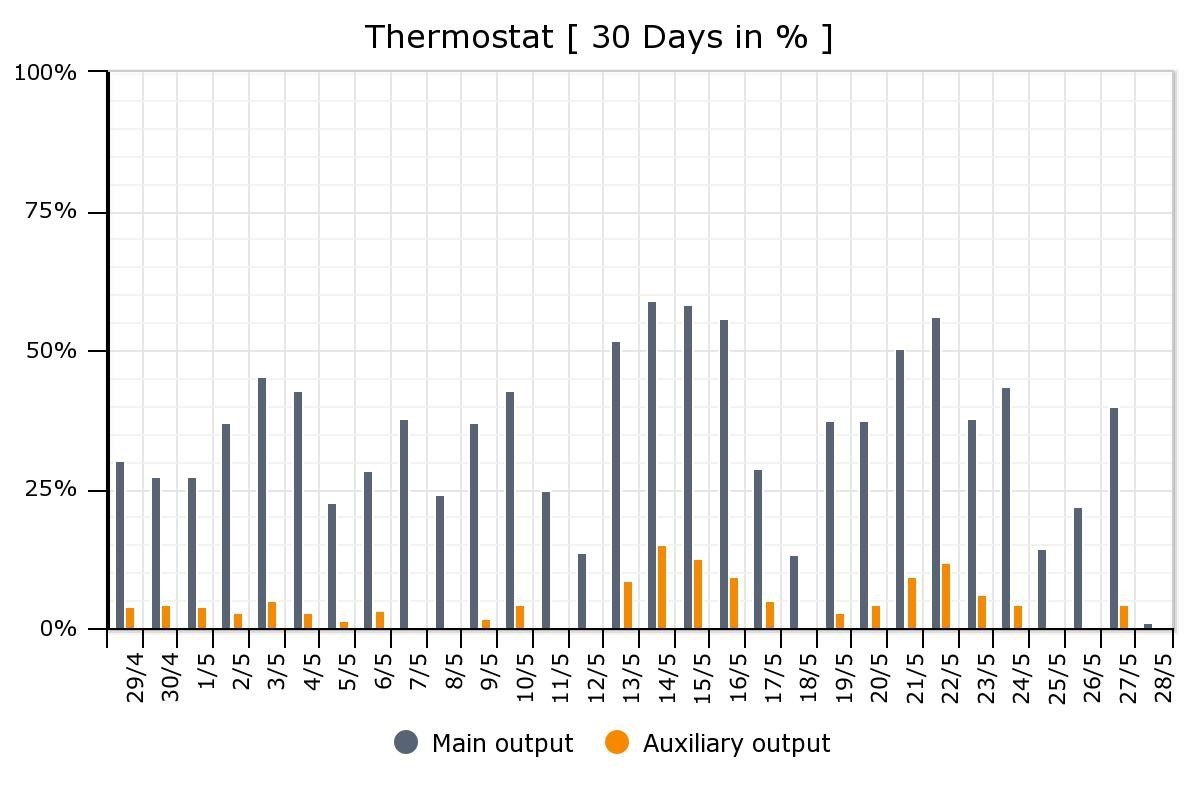 The relative use of the oil-fired furnace (“Auxiliary output”) compared with the thermal battery (“Main output”), in the first month after installation.

So how do we like having our house turned into a lab? It has been busy as we have had many visits from Louis, electricians, furnace technicians, data analysts and plumbers; all have been professional and excited to participate in this project. There have been a few setbacks, but we understand that this is a work in progress. People have asked how we feel about having several hundred kilograms of salts in our basement. Rob and I, both chemists, know that sodium acetate is low risk. In fact, it is used to give salt and vinegar potato chips their flavour. And we can monitor the hour-by-hour progress of the system on our phones, which is satisfying for data-loving scientists. Together we are exploring how different demands, such as running the dishwasher at different times of day, influence the results.

Most importantly, this experiment shows that individuals can make significant differences in energy consumption in new ways. Not every house can be retrofitted with a thermal battery, any more than every house be outfitted with solar cells or a windmill. But we can all try to do something. Our future depends on it.

Mary Anne White is Professor (Emerita) at Dalhousie University in Halifax, and an Officer in the Order of Canada.