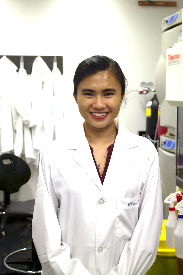 Irfani Rahmi Ausri, a PhD Candidate in the Department of Chemistry and Nanotechnology at the University of Waterloo is taking part in Soapbox Science Waterloo on June 9th, 2019 with the talk “Tubes that tells the state of your health: A journey to the surface of carbon nanotubes sensors”

Making bridges and structures with popsicle sticks! Back in elementary school, we were learning about the strength of various shapes and we found that triangles were the strongest shape. If you were to make a structure made of a bunch of triangles, it will be able to hold heavier objects than those which don’t have triangles. Once my group realized that, we took off and created the strongest popsicle bridge!

The miniaturization of technology and its impact on people or other living things! Working with nano scale materials to develop cutting edge technology and knowing that it will positively impact the world makes me excited to go to work every morning.

Failures happen consistently in the lab, so whenever an experiment works and the result is great, everyone in the lab gets really excited with you. Sometimes we’d get really excited and make a huge ruckus in the lab. It’s all great fun!

There are so many misconceptions about science that induces fear in many people. On the contrary, science is awesome! There seems to be an invisible barrier that prevents many people to appreciate the beauty of science and Soapbox Science is going to break down that barrier. I hope that by the end of this, more people will be excited about science and technology!

I wish that everyone in the world can have access to the scientific publications. Unless you’re in academia or organizations that have access to journals, you’d have to pay to read the publications, which I think is ridiculous. Many scientific projects are publicly funded and so the results should be available for everyone to read. Some scientific communities have pushed for open-access articles and it’s a great start but there’s still more work to be done.

The ability to go down to the nano-realm, just like Ant-man’s ability to go into the quantum realm. I’d love to witness and experience all the phenomenon I currently work with.

Science transcends all religions, genders and cultures. If something excites you and keeps you up late into the night (I don’t condone not sleeping), run and have fun with it! You’ll stumble upon some amazing knowledge!

I usually plan my day early in the week and so once I get in the office/lab, I immediately start to work. When I have downtimes, I read scientific articles that pique my interest and if I don’t have time to read, I bookmark it for later. I like to be focused and productive so most days, I spend majority of time in the lab. Sometimes, I’d go grab snacks with labmates or attend visiting scholars’ seminars. It may not sound fun for some but I hardly ever feel exhausted at the end of the day because I enjoy it!

Science is driven by passion and curiosity. To me, research/science is not a 9-5 job and so sometimes when I’m onto something, I’d keep on reading and doing stuff in the lab until late at night. Even during holidays, I like to bring some scientific articles with me. This passion is my small contribution to the world that I hope will positively impact people’s and other creatures’ lives.