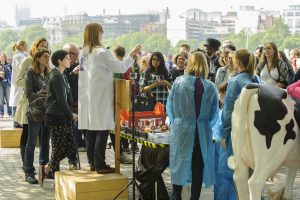 Soapbox Science enters its 8th year in 2018, and promises to bring a summer of excitement, fun, and fantastic science. This year we are growing and expanding to be bigger and better than before, with events organised across the world. On top of this, Soapbox Science is exploring new avenues with six Art & Science events taking place in art festivals around the UK.

What is Soapbox Science?
Soapbox Science is grass-roots science outreach organisation that brings cutting edge research onto urban streets whilst also promoting the visibility of women in science. We place inspirational speakers on soapboxes and encourage them to engage in and start conversations with the public about their work.

Our UK & Ireland events are:

Our dates for our overseas events are: