That time I tried to discuss science with shoppers: Meet Rebeca Gonzalez Suarez 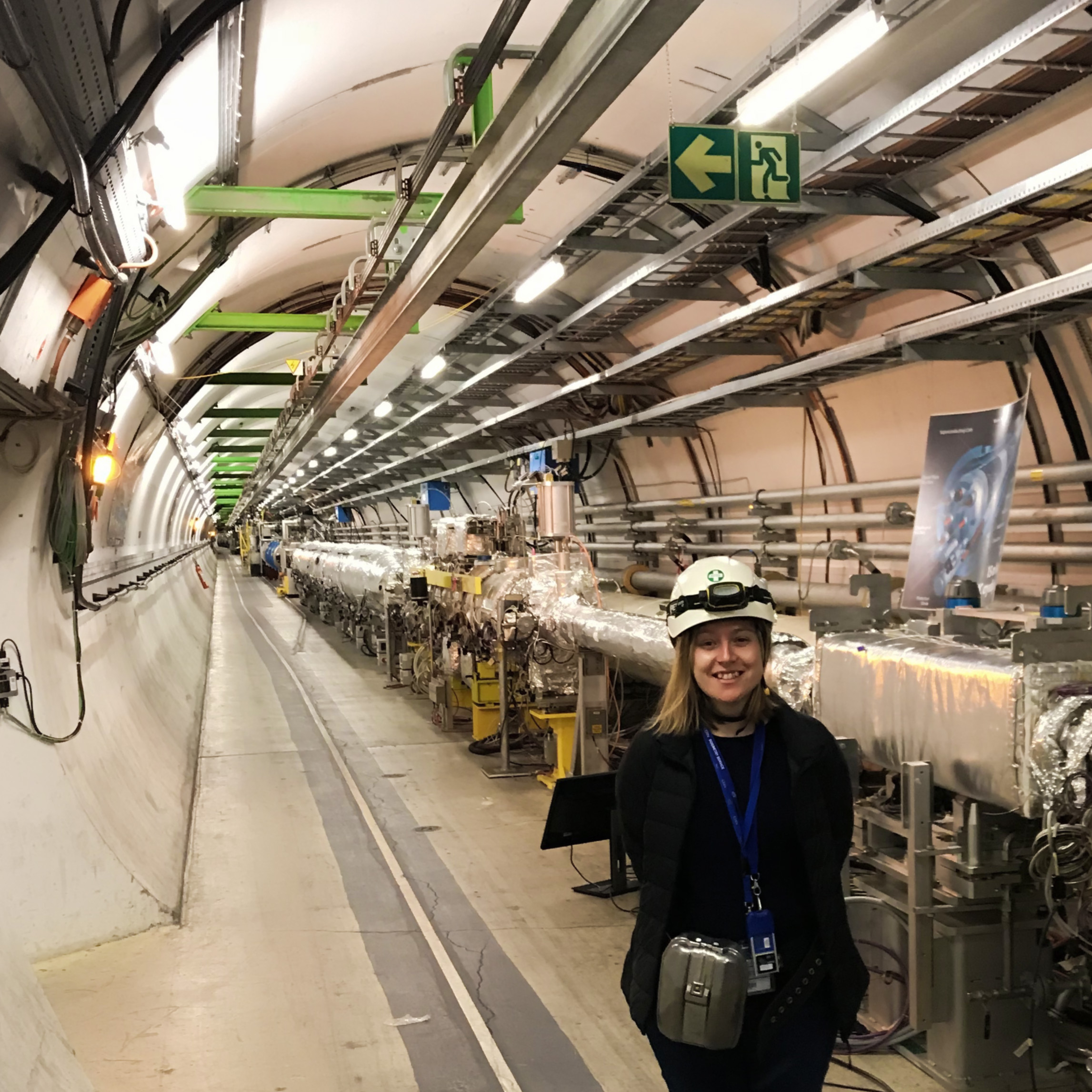 Rebeca Gonzalez Suarez is a Spanish particle physicist that works at Uppsala University in Sweden where she teaches physics in the Department of Engineering Sciences. Now a member of the ATLAS Collaboration at the Large Hadron Collider (LHC) since 2018, she started her career in the CMS Collaboration (2006-2018). A Higgs boson and top quark expert, today she keeps trying to find answers to long standing questions in the field searching for new phenomena at the LHC. At the Soapbox Science event in Uppsala on 25 May you can follow her on a guided tour to the subatomic world, visit the Higgs boson and the rest of the elementary particles, and plan a trip to the dark side.

I am a particle physicist and my research involves investigating what comes out of high-energy proton-proton collisions at the Large Hadron Collider at CERN. We do this to learn more about elementary particles, those you cannot break down into smaller pieces. I have been lucky to be a part of the group of people who discovered the Higgs boson in 2012 (and I have a PhD thesis to show for it) and I have studied, among other things, the heaviest particle that we know of, the top quark.

Since last autumn, my research is funded by the Swedish Research Council, and I teach physics at Uppsala University, but before coming to Sweden, I spent ten years based at CERN, the biggest particle physics laboratory in the world. CERN is located in the French-Swiss border, very close to the city of Geneva, where I used to live.

I am a woman in science and I come from an underprivileged background. I did have a lot of privilege anyway compared to most people (and luck!), and I’m aware of it, but I still could see first-hand how opportunities do not come in the same way for everybody, and that hard work can only get you so far. So, because I want to make science more inclusive, and I know that representation matters, I take outreach very seriously. And I like outreach most of all because it can be quite fun and sometimes you get to do very cool experiments with the excuse of introducing science to the people that actually pay for it.

I have done a few things in the last years, and I have had a lot of fun. Sometimes I stressed about organization before and during the events, but it usually turned out fine, and worth the effort at the end.

This is about the one time when it was not. In September 2015, I participated for the second time in an event for the “night of the researchers” in Geneva. The goal for this event was to bring science to the regular lives of people by setting scientists free inside a mall, a shopping mall. The premise of the plan was good, I think it cannot be bad to get some science thrown at you, and this is also why I signed up for Soapbox Science. The execution of the plan however could have been better.

I was assigned to a big chain store shop that sells a bit of everything: electronics, books, and gadgets of all sorts. And in particular, my activity was to happen in the area of the TVs. This was 2015 and curved TVs were omnipresent. We have brought to the TV section a very cool feature: a colleague of mine was to go down 100 meters underground to one of the experimental caverns with a camera to give us a virtual visit, assisted by two more colleagues in the control room, and I was going to host from the shop. The visit was to be broadcasted in one of the huge curved TVs on sale. This was to be done in slots of 15 minutes at certain times agreed with the experiment beforehand. In between visits we had a little quiz with simple questions to keep the audience entertained.

This kind of virtual visit is a fantastic opportunity for people that cannot travel physically to CERN to go underground and see what kind of experiments we do with some detail. These visits take place at moments in which the LHC has stopped operation, even for a few days, and sometimes no other kind of visits are allowed. The guides can get very close to the big detectors and show not only their very large size, but also can focus on details that are not easy to show in regular visits. These visits are really quite something, I have done a few myself, mostly for high schools, and I can only recommend them. 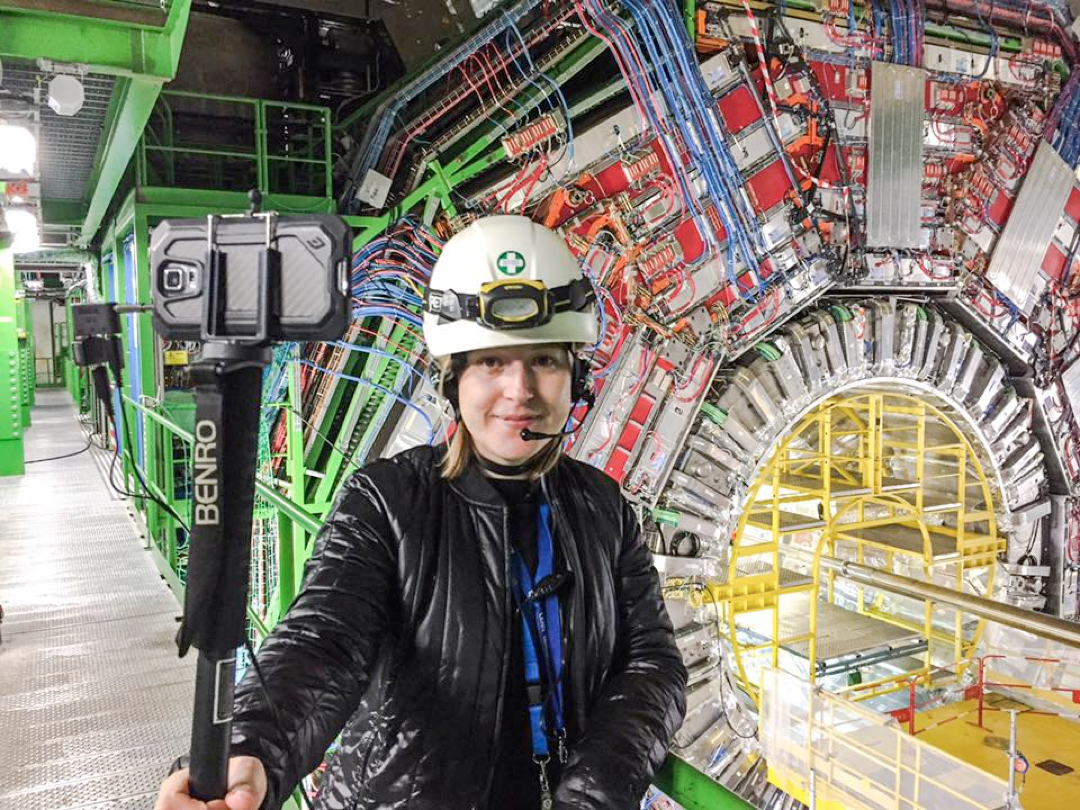 The author, guiding a virtual visit to the CMS experiment in 2016

However, the TV area was in a deep corner of the shop, an area full of TVs well outside any natural flow of people. Somehow nobody was outside advertising our virtual visit, and nobody announced it using the speaker system of the shop, so in fact, nobody really knew we were there. We were two people in person in the shop to discuss science and my colleagues on-site.

After setting up our things, we quickly realized there was not a lot of people coming. We had to wait a few minutes before the first clients passed by there and when they did, there were usually 1, maximum 2 people at a time, and they clearly mistrusted out intentions. They were not aware that there was a science outreach event going on and they were perceiving us with high levels of suspicion. We tried to make contact with them and it was very hard, they did not want to be bothered and most of them ended up chased away from the TV section of the shop.

It took a while before the first shopper came to us, and to our astonishment, we got asked about curved TVs, comparison of TV performances, and prices. Eventually, we managed to attract one person or two to our stand and the first visit had some audience. I think the idea was good, and the connection worked very well. The people in the experimental site were not to be blamed by the lack of success, they did the best possible with the situation. But we had fixed time-slots for those visits to the cavern, and they were never advertised. In the middle of the visits, the shop would chant loudly its offers by megaphone, the visits were never announced.

We had t-shirts to give away but people would just hear from other people we were giving free t-shirts inside, so they would come in, get a t-shirt, get out. The only thing that worked to keep engagement was other people: I had two friends visiting me, and when they came, they attracted shoppers. A colleague also passed by and was of course interested, and that made 3 more people curious. Seeing other people coming to us made people come as well. Much like a restaurant that is empty scares away new customers.

So this was a story of failed outreach, but it was still ok, because we did discuss science with some interested customers, and we learned something. Not only about TVs, but also about what works and does not for engaging the public.