We have so much to gain from more open dialogues about science!: Meet Overleaf

CG: It’s good to see an organisation encouraging women to pursue their efforts in science. By supporting Soapbox Science, and similar organisations, we can encourage women in this field, especially those who appreciate seeing examples of those they identify as being similar to them, in order to be encouraged.

KC: As someone really new to the Overleaf team, I’ve been getting up to speed really quickly on what’s important for Overleaf and the initiatives that we sponsor. Soapbox Science really stood out as being an amazing channel for female scientists to step into the public arena and showcase their work. I’m also a huge fan of the format, no powerpoint slides, no theatres – just a public debate and opportunity for anyone to ask questions they’ve always wanted to know the answers to, from remarkable women in science.

SS: Why is it important for researchers to make their work accessible to the public?

JL: The public needs to be able to trust and engage in the research process. When research is not accessible, everyone becomes dependant on the interpretation of findings by others. It is also important to understand the process, not just the conclusions, since the methods can change how we interpret the results. This is why accessible work is more than an open access paper, it is also about engaging with the public, which will hopefully inspire future scientists!

HW:  We see the hazards of incomplete science communication everywhere. The most dangerous case that comes to mind is the popular dissemination of a fraudulent paper linking the MMR vaccine and autism twenty years ago. The fact that the public was presented with this alarmist result, and not with the details of the studies that went on to discredit it or the eventual retraction by the journal that published it, led to the rise of an anti-vaccination movement, and several outbreaks of measles in turn.

People are right to turn to science to guide their most important decisions, and the public needs to be able to see scientific results in context, from scientists themselves, rather than a sensationalist version presented in bad faith.

More positively, we have so much to gain from more open dialogues about science! To start with, opportunities to inspire future scientists.

CG: It’s important that everyone has the opportunity to be aware of how developments in science are coming along. And what’s trending.

KC: Personally, the more research and information that is made publicly available, the more informed we, as members of the general public, can be about key issues and important advances in our society. It also opens up the opportunity for informed debates and collaboration, which is key for making great steps forward in what we’re trying to achieve.

SS: If you could change one stereotype about science/scientists what would it be?

JL: The image of a single genius scientist. Behind an experiment is often an entire team: research assistants, postdoctoral researchers, administrative staff, etc. Collaboration is a big part of science and each part of the team is just as important as the rest. There are many opportunities to make an impact in science.

HW: The stereotype that science (and some scientific fields in particular) requires some kind of innate “brilliance” that can’t be taught or learned is one we could definitely do without! A 2015 study in Science comparing different academic fields found women were less likely to enter fields where innate genius is perceived to be more important than hard work. I find this study particularly persuasive because it accounts for the outliers in the typical gender distribution across STEM and humanities: philosophy, which was perceived as requiring more genius than grind, was the most male dominated field they considered, while biology, which was seen to value hard work first, was slightly female dominated.

We need to move on from thinking that scientific ability is innate, because that leads us to assume that scientists should always look the way they’ve always looked. Let’s think instead about what anyone and everyone can achieve in science with the right resources, training and motivation.

CG: That they’re “nerdy” which I suppose is a stereotype in itself in some ways. Because I suppose they are nerdy (I am, anyway – that is “characterized by an obsessive interest in something”) but when applied stereotypically, nerdy can often be about a certain look or a typical personality.

KC: What a great question! And some great answers from my colleagues! I’d have to say that there is still a public perception that science is a male field of study, which is something that needs to be addressed, and with support in the right places, it can be.

SS: Soapbox Science brings together scientists from different disciplines. How does transparency and collaboration improve science?

JL: Reproducibility is a problem in research, but can be improved with transparency and collaboration. If the process is more transparent, then flaws in the experiment can be exposed and corrected. This saves a lot of resources and time. Explaining the process to another discipline can also help to uncover oversights. Being transparent about negative results can also improve science, you might have missed something, or it might spark an idea for someone else. It’s also okay to fail – as your failure can provide the bedrock for someone else’s success.

CG: For me, it allows for better understanding of one’s own discipline when you see how it relates to another. Maybe there is a similar concept in one discipline which affects another that only becomes unearthed because of collaboration.

KC: In any discipline cross-team collaboration is critical to an efficient business/company/project.  Pulling in knowledge from other areas can highlight things that you are too siloed to see, especially when you’re working in-depth on a project and unable to step back fully to appreciate its entirety.

SS: If you were to stand on a soapbox and talk about Overleaf with the public, what would be your take home message?

JL: If you’re collaborating on a paper, you should be using Overleaf. We are constantly improving Overleaf to make collaboration easier. We also value and listen to our users. When you write in to support, a real person on the Overleaf team will respond.

HW: Overleaf is an online tool for editing documents with a powerful open source software called LaTeX. LaTeX lets you prepare documents with a high level of precision, suitable for professional publishing. It’s particularly well suited to writing scientific notation and creating graphics, and it’s the standard typesetting software in maths and physics for that reason. Overleaf “upgrades” LaTeX with collaborative editing features such as track changes, which might be familiar from programs like MS Word or Google Docs, and by removing the complications of installing and running LaTeX locally. For authors used to editing with programs like MS Word, Overleaf makes it much easier to switch to LaTeX. And for those using LaTeX already, Overleaf makes collaborating much more efficient. For everyone, it takes care of version control so you don’t have to.

The most important message I could get across when talking about Overleaf is that it’s always worth using the best tools for whatever job you are doing – even when there’s a learning curve initially.

CG: That if we want to do more collaboration in research, Overleaf is a marvellous way in which to do it 🙂

KC: I think my colleagues have done an amazing job at explaining what we’re about at Overleaf.  I’d just add that if you’re struggling or getting frustrated with your current research project due to access issues or lack of collaboration or review tools, then come and speak to our team.  We offer a free version of Overleaf, as well as a range of subscription packages to suit your, your institution, or your company’s needs. 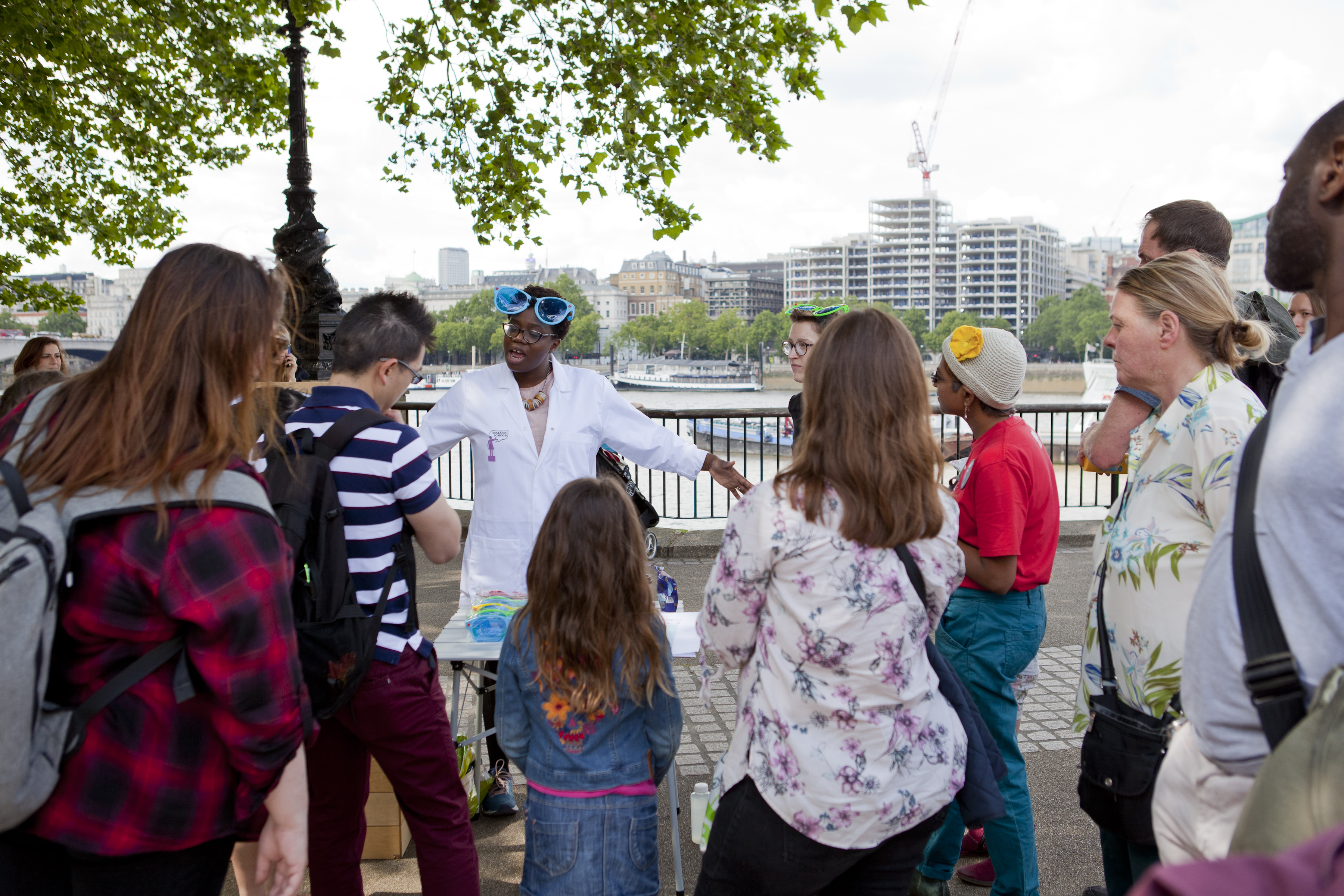 Overleaf supported the 2019 Soapbox Science London event, which showcased the work of women in Science, Technology, Engineering and Maths to over 1,300 visitors to the Southbank.