Dr Sarah Harris (@sarahthephd), Research Assistant in Regenerative Medicine, Keele University is taking part in Soapbox Science Stoke-on-Trent on 6th July 2019 with the talk: “Why would you want to make your spine glow in the dark?”

Hello, my name is Sarah. I am currently part of a team that works on coming up with novel and exciting spinal cord regeneration therapies, looking at ways of helping dogs and humans regain mobility after injury. I am a board gamer, a contemporary romance reader, a knitter, a party planner, an occasional musician, a total nerd, a walking encyclopaedia of song lyrics and film/TV quotes, but if you ask anyone who has met me what my defining *me* thing is, they’ll tell you I’m a fish person. Why a fish person, I hear you ask? Well, that is because I spent the best part of a decade studying fish health and as far as novel characteristics go, outside of fish biology circles it’s a pretty unique one.

When you look at the research field, fish biology is actually reasonably well balanced in terms of gender however the stereotype still often falls in favour of it being a male area. Fishing as a hobby, working as a fisherman or fishmonger, these aren’t things that are regularly associated with being a woman. So, when asked what I do, I often get a quizzical look whenever I have said that I am a fish biologist followed by the question “how did that happen?”. At this point, the expected reply is something along the lines of “oh I’m a keen scuba diver” or “I have a brother/father/uncle who got me into fish”, and I will always take great delight in turning that quizzical look into one of outright confusion when I say, “because I studied French”.

I never really knew what I wanted to do when I grew up until I hit 20. I worked part time as a lifeguard at the local swimming pool, and also as a private music teacher. I kept my options open at school studying sciences, electronics, music, and languages. By the time I got to university at 18, I had been able to narrow it down to studying Biochemistry and French, but I still had no real plan as to what it was that I wanted to do with my life. This all changed in the third year of my undergraduate studies. As part of the syllabus for the French half of my degree, I had to spend a year living in a French speaking country. Most people in my class went to universities in France and studied their other subject. If I had done that, my life would probably have taken a very different route. What I did instead was secure a Leonardo Grant (a subset of Marie Curie EU funding) and this meant I could spend the year working in a laboratory abroad. I spent several meetings discussing my options with Dave, the tutor in Life Sciences responsible for study abroad students. What I wanted was to go to the Pasteur Institute but, as Dave pointed out, whilst I was a good student, I wasn’t a great student with firsts across the board. The Pasteur was also known for taking its time in deciding whether or not they would actually take students on and because I had to go to France to get my degree, this would be a risky gamble to wait for them. So I went with my back up choice; a lab at the Natural History Museum in Paris.

I know. Worst back up plan ever, right? 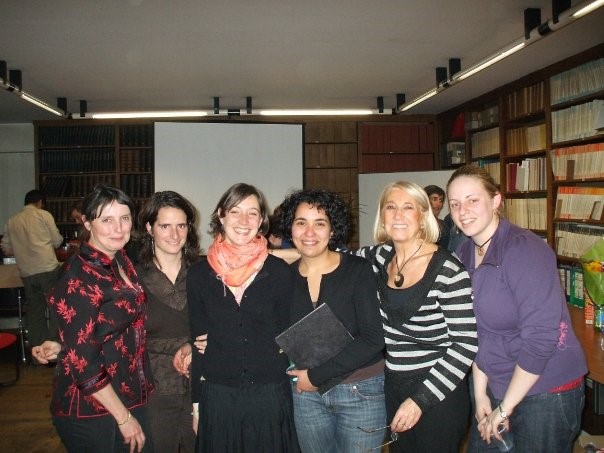 Dr. Sylvie Dufour (left) and the rest of the team at the Natural History Museum, Paris after a PhD viva.

Going to the Natural History Museum was probably the best decision I have ever made. It is where I truly found my passion for science and research, and my career choices since have been because of my time there. My supervisor was an amazing woman by the name of Dr. Sylvie Dufour. Sylvie isn’t just a fantastic scientist, she’s one of those humans that is excellent overall. She always had time for me, no matter how ridiculous my questions. I was included in everything from conferences, grant meetings and visiting a collaborator’s salmon farm in the Loire Valley where we got to join in with releasing fry into the river, to celebrations in the lab and acknowledgements in papers. It didn’t matter that I was just an undergraduate, I was one of the team. There was no specific “aha!” moment for me, but I was in the second half of my degree and starting to think about what I wanted to do afterwards, and being in such a supportive, exciting environment I realised that I didn’t want to leave – I wanted to do research and be in a research lab. 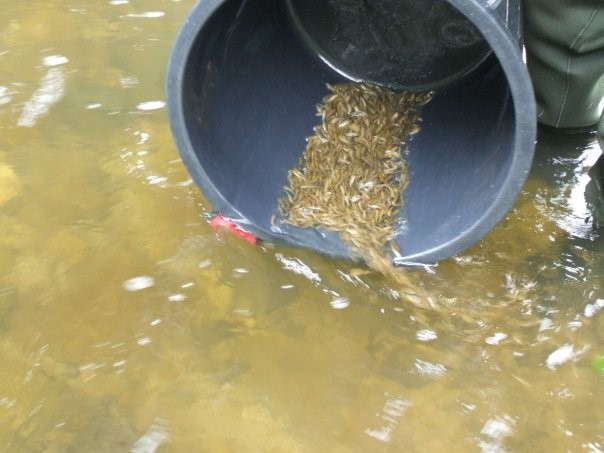 I had picked my placement because I got to go to Paris rather than based upon the science so when I first started, my project looking at gene expression in eels (and other fish) was just one of those random things that you do as part of your degree that doesn’t necessarily mean much beyond being a mechanism to learn techniques. As the year went on, I fell in love with fish biology. The European eel (Anguilla anguilla) is an amazing creature. It starts its life as a clear leaf shaped larva in the Sargasso Sea in the North Atlantic on the American side. It swims across the Atlantic to Europe where it not only changes into a more classic eel shape, but also goes from a saltwater to freshwater fish. It then lives in rivers throughout Europe for up to 20 years before changing back into a saltwater fish and migrating back to the Sargasso Sea to spawn. This second migration of over 3,000 miles is made even greater by the fact they do this whilst fasting. I can barely make it the 2.5 miles into work without a snack to tide me over, never mind traversing an ocean unfed. Unfortunately, eel numbers are falling fast. Over the past 20 years, their numbers have reduced by as much as 99% and they are categorised as critically endangered on the IUCN red list. There are several reasons for this; overfishing, pathogens, dams blocking their migration down rivers to name a few. One of the biggest challenges faced by scientists to try and deal with this crisis is no one can get the leptocephali (eel larvae) to survive long enough so there is currently no way of artificially inflating the populations through breed and release schemes (although I believe one of the Danish groups is getting pretty close). I hadn’t done any “real” research before this point in my life and it blew my mind that I was part of a project that was working towards trying to ensure the survival of an entire species.

By the time I got to the end of my placement, I had made two very big decisions: I had decided I wanted to go into research, and I had decided what field I wanted to work in. The rest is history. After my undergraduate studies, I moved to Germany for 2 years (brilliant use of my French degree, I know) where I worked on fish immune responses and gut microbiology, and eventually combined both of these things in my PhD back in the UK. I doubt I would have done any of that, though, if it hadn’t been for my year at the Natural History Museum. Would I have done a year abroad even if I hadn’t been studying French? Probably not actually. For all I loved the Museum, I was massively homesick at the start of my placement and I hated where I lived. I initially stuck it out because I had to, not because I wanted to, and if it hadn’t been integral to my degree, I may even have quit and missed out on all the experiences I got to have.

So that is my story about how studying French set me down the path to becoming a research scientist. Mostly, I really like it because it is just weird enough whilst actually being the most natural thing in the world in the way it happened. Is studying abroad for everyone? No, but I will always vote in favour of giving it a go. Will I ever go back and work in Paris again? Erm, it’s half an hour on the train from Disneyland. Obviously the answer is if there was a project available for me to do so. Would I go back to the Museum? In a heartbeat.

1 Response to Why am I a research scientist? Parce que j’étudiais le français: Meet Sarah Harris